The banking system, which is part of Romania’s national critical infrastructure, is ready to serve the financing needs of companies, population and the state in order to ensure a faster economic recovery, especially in the context of the pandemic.

Romania should include supporting the entrepreneurial environment among its priorities. Compared to other EU member states, Romania ranks last in terms of entrepreneurship. Thus, with only 29 SMEs per 1000 inhabitants, Romania has half the European average, of 58 SMEs per 1,000 population. The elements that can be improved involve company capitalization and reducing risks generated by the size of commercial credit, which can generate blockages. Romanian companies’ capitalization  levels continue to be a hurdle for accelerating company financing. In 2018, nearly 40% of the companies had negative capital. A three-party dialogue involving the authorities, the banking system, and entrepreneurs should be cultivated so that the optimal solutions for the development and support of the entrepreneurial environment could be jointly identified. Banks are already involved in this support effort.

Lenders took action and announced solutions for customers who encountered financial difficulties generated by the pandemic. The support measures adopted by banks and through legislation have so far allowed about 20% of corporate debtors to benefit from deferred loan obligations for up to nine months. Thus, one in five companies with loans from banks have had their installment payments suspended. There are currently 100,000 companies with loans from banks, which means that banks’ balance sheets include some 10% of all active companies in Romania.
SME Invest Romania is the government’s program that supports the SME sector and banks have joined the effort. The participating  banks are working hard on speeding up the pace of approval procedures for the massive flow of SME financing applications. Currently, we are witnessing a general mobilization among the banks involved in the program, as the volume of applications to be analyzed is more than 20 times the regular workload. We expect the results to show a faster positive trend soon. This advance is influenced by the clarifications and discussions with the parties involved, which have resulted in some legislative changes aimed at facilitating the optimal implementation of the program. In terms of procedures, the participating banks have implemented automated processes, so that they can provide the feedback expected by customers in the shortest possible time.
This process is carried out in full compliance with the prudential aspects related to performing an accurate analysis of customers’ debt repayment capacity and maintaining financial stability. Under the program, SMEs have applied for investment and working capital loans that can be guaranteed by the state up to a maximum ceiling of 80% and 90% for small and micro enterprises, respectively.
More than 60,000 companies have enrolled in the program, but the actual financing and guarantee eligibility depends on the guarantee ceiling and whether the SME is bankable. On this note, I believe the program’s early-stage success will be based on the exhaustion of guarantee ceilings rather than the number of approved loan applications. Of course, we want as many companies as possible to access loans. From the very beginning, we learned that the SME Invest’s guarantee ceiling stood at 15 billion lei, but it has been oversubscribed several times.

The SME Invest program is dedicated to SMEs that have been affected by the COVID-19 pandemic, but have both the ability to develop in this time of crisis and to repay the loan. Banks must carry out appropriate analyses in order to avoid an increase in the rate of non-performing exposures and putting a burden on the state budget.
This file analysis process involves an accelerated procedure due to the large volume of requests. The eligibility criteria look at the cash flow analysis, indebtedness ratio and default probability. It should be noted that the guarantees provided by the state do not improve the debtor’s ability to repay a loan.
Statistics show that only 15% of Romanian companies are bankable but, at this stage, there are no estimations on the approval rate for loan applications.
It is important that the SME support program achieves its goal, and the Romanian economy’s recovery is done in quick steps, while ensuring financial stability.

This is also available in our print edition of Business Arena.

BUSINESS ARENA AT A GLANCE

Business Arena Magazine is a monthly English-language business magazine published by Business Arena Publishing Group SRL.
The magazine was launched in October 2009, and, since then, it has gained reputation as a valuable source of information and analyses for business people and professionals, offering a wide range of exclusive interviews, feature stories and reports, market analyses and special columns. 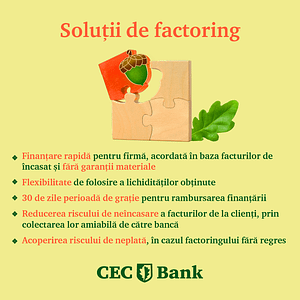